The Times had an Op-Ed today on testing female athletes for high testosterone levels.  It convinced me that this is a troubling practice.  It’s one thing for a sport to choose to ban “doping” with supplements, but to ban a female athlete because she has too much naturally occurring testosterone or to force her to have an operation or take hormone suppressants to reduce those levels in order to continue competing in her sport strikes me as unfair.

First, as the op-ed points out, it’s not clear that higher testosterone leads to better performance.  Second, there are all kinds of naturally occurring advantages people have that society is profoundly uncomfortable handicapping.   And just to be clear, when I say society or culture here, I’m primarily talking about western, first world, etc. because that’s what I have grown up in.

What is feels like to me is a discomfort with people who don’t conform to traditional gender models, here complicated by the fact that it’s also about sex, which people feel they can somehow make an absolute binary.  As our culture grows more comfortable with people expressing themselves on a gender continuum, we still cling to this sense, “yes, she may dress like a boy, but she is essentially a girl.”  Women even being involved in sports is seen as a threat by some people.   few people are willing to say “A woman’s place is in the home”, but plenty of people are willing to take digs at women’s sports by saying things like, “Nobody watches women’s [basketball/soccer/tennis].”  Usually, they say these things when there’s a women’s basketball game on.

Being “male” is still seen as a de facto advantage in sports.  Even competing in sports causes a woman to take on attributes that are seen are more masculine than feminine.  Having more biological “maleness” in the form of testosterone becomes profoundly threatening not just to other female athletes who may perceive you to be advantaged, but to everyone who wants to preserve a strict definition of what it means to be biologically male or biologically female.

For some reason now that the weather my digital scale is working better (and then it snowed after I started writing this post and my scale is no longer giving me a body fat calculation).  Still stuck in my low-180s holding pattern, but at least it’s holding and not rising for now.  It’s getting hard as I get closer to this half-marathon not to want to eat everything in sight. 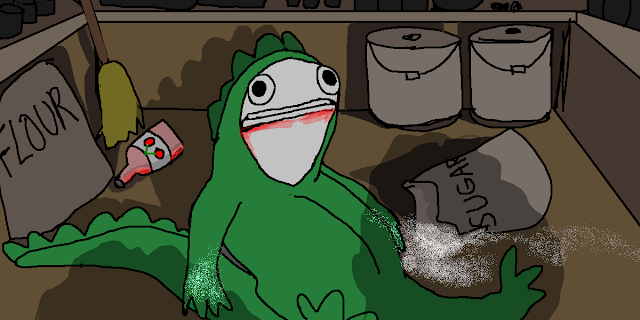 From: Hyperbole and a Half. Go buy Allie’s book. I’ve lent it to at least three people already and am feeling guilty about cutting her royalty stream.

Instagram FeedPlease check your feed, the data was entered incorrectly.