I made cashew milk for the first time last night.  It’s tasty, but having the patience to let the cashews soak overnight beforehand was tough for me.  Funny that something so easy tests my patience because I have to let it sit.

America’s Test Kitchen had a cold brew coffee recipe I might try.  A twist at the end: adding kosher salt! Weigh-In: 185.8 this morning.  I was 183.5 two days ago.  Looking at the trend lines from my scale, over the past month and a half I’ve crept up from “around 184” to “around 185” with about 2 pounds of water weight related variance in either direction.  I’ve stopped tracking my food over the summer and I’ve upped my intake of beer.  Both of these things are mistakes, I think.  Time to get back on the bandwagon.

Non-Scale Victory: On the other hand, I’ve run 20 miles in the past 5 days — two 5-milers and one 10-miler — so despite what the scale says, I still consider my overall health to be good.

So, last few weeks have not been so good with the running.  The most I ran this weekend was around the block, because it was 10 pm on a Sunday and I had been in my running clothes all day and still had not gone for a run.  This was definitely one of those “you have to make exercise a priority” kind of days and it just never happened.  First, we had a friend stay over, and while I tried to convince him to go for a run (since he’s doing a 5K in a couple of weeks) he said no because he didn’t bring his running shoes.  Then, we had to go get groceries and run errands.  Then, we started brewing a saison, which for all-grain takes several hours, allowing me time to do yard work and entertain neighborhood kids who came over to play with our dog.

Once we’d extracted our wort, we took a break to go watch the USA/Portugal game — tied, flipping tied — which didn’t exactly lift my spirits as much as watching us beat Portugal would have, though was better than a loss.  Finally, at about 9:00 we got down to boiling our beer, which took 90 minutes and then another hour or so for the cool down and racking into a carboy for fermentation.  A busy, full day, none of which involved my running…at least until I took approximately seven and a half minutes to run around the block.

Good weekend on the BREWS side, less good on the MOVES side.

I finally made it out Wednesday afternoon for a sweaty 3-miler.  Our 4-year-old neighbor is insanely in love with our dog and craves constant attention, so she decided to engage in an attention-seeking blitzkrieg yesterday while I tried to work from home.  She began ringing/knocking on the front and back doors and tapping the downstairs windows about every 10-15 minutes, which drives my dog crazy.  Even after I opened the door, explained I was trying to work and that she was bothering our dog and that I would no longer be answering the door, she continued to do it.  I stopped answering the door and decided to go for a run.  Was she sitting on my door step when I left? Yes.  Did she start up again about 20 minutes after I got back from my run?  Yes.  Did she start ringing the bell within 5 minutes of Josh getting home from work?  Yes.  At least I was less stressed after going for a run.

The Oatmeal is Doing a Running Book

Thought everyone could use some humor after the laugh-fest of the above, so check out some of the new Oatmeal running book here. 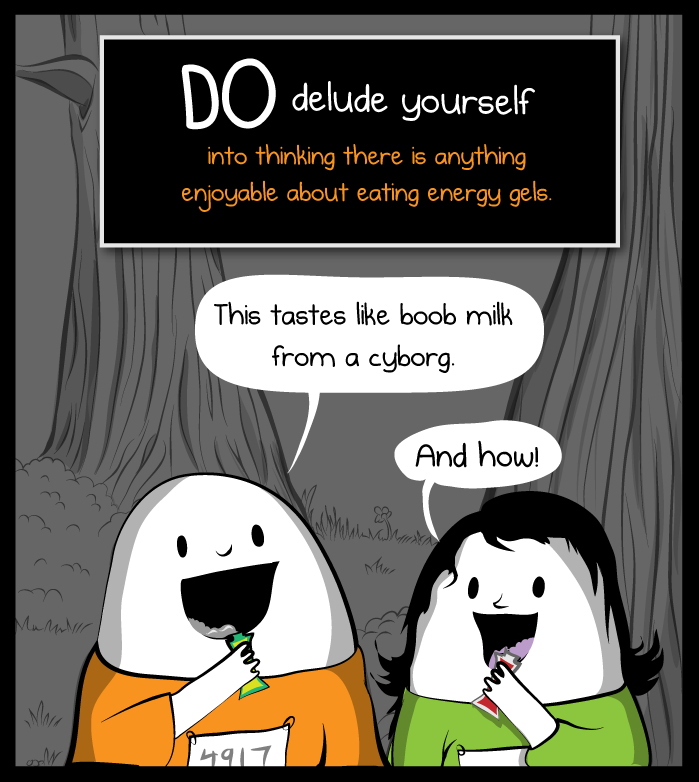 Elite Runner — PR in the 5K

I ran a sub-30 minute 5K this morning at the CRIS Run for Refugees.  It was an out and back route, and we had a brief shower on the outward route, but the sun came out for the run back.  I was struggling a bit with my breathing on the way back, possibly a combination of running out of gas and the air being full of pollen, but I broke the 30 minute mark, shattering (shattering, I say!) my previous 5k record by a minute and a half.  Did we take pictures?  No, we did not.  Because I am forgetful like that.

Also, because I needed to fit a long run in this weekend and am flying out to Chicago tomorrow morning, we tacked an extra 4.5 miles onto the 3.11 we’d already done by taking the entire loop trail of which we’d run only part for the 5K race.

The birds are out in force.  I saw more types of birds today than in the past 6 months combined.  Blue birds on the run this morning.  Mourning doves perching right out side the back door.  A robin is building its nest on our back porch light, a nest I have been begged not to remove so I am settling for trimming off the streaming bits so it sits neatly on top of the light.

The weight is ever so slowly ticking downward, but the miles are adding up fast on my half-marathon training — I’ve run 38.5 miles in the last 30 days, which Nike+ tells me is more miles than the average woman my age (who uses Nike+).

Latest weigh-in is 182.6, which is down about a pound from last week.  Finally, some progress!

I had my thumb over the camera for the shot with body fat, so this is total body water. My body fat reading is still hovering around 30%.

Instagram FeedPlease check your feed, the data was entered incorrectly.