Josh and I held the first semifinal match blind, but short of putting the beers themselves in opaque glasses and closing our eyes while we drank them, it was hard to call this a blind tasting while viewing the two contenders – Thirsty Dog’s 12 Dogs of Christmas and Dark Horse’s 4 Elf  – since the 4Elf is so much darker. 12 Dogs took this round 17 to 16.5.  Our tasting notes are below if you’re interested.

For more on Christmas Ales, check out this post by Jon Katz over at Food Republic.  He gives Anchor a nod, so we will see if it manages to take down Great Lakes.  I might have put my thumb down on the scales in favor of Anchor Steam, after buying a magnum of it at Barrel and Bottle at the North Market.  (I have bottles for the tasting, but we’re going to need a big group to get through the large format bottle!) 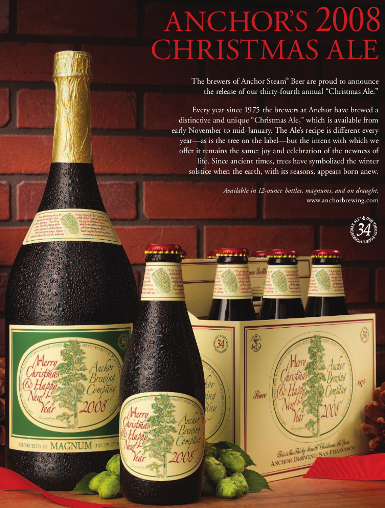 An Anchor Christmas Ad from 2008, to give you a sense of scale.

12 Dogs of Christmas
Very clear copper color with an off-white head.
Smells of ginger, cinnamon, and honey.  Ginger stands out, but not apart.  Very much what we expect in a Christmas Ale.
Spices up front and center.  Again mostly ginger and cinnamon.  Sweet and malty early on, but quickly gets bitter.  Long finish, spicy and bitter but not entirely dry.  As it warms, the malt gets more intense.
Medium-full body, medium carbonation.  Slightly warming.
Very much in the Great Lakes Christmas Ale mold, but maltier.  Nicely done.
J: 8.5/10       E: 8.5/10
Dark Horse – 4 Elf
Dark brown and opaque, with a tan head.
Anise and grape (raisin?) in the nose, along with chocolate and some other spicing.  Darker-smelling than typical.  As it warms, the chocolate comes out much more strongly, and Erin gets a little coconut.
Significantly more roastiness and chocolate on the taste.  Still highly spiced, though.
Medium body, medium carbonation.  I get a distinct alcoholic warming as it goes down.
A different take on the style, but nicely done.  This match-up is a lot more difficult than I would have expected.
J: 8/10       E:8.5/10

Please check your feed, the data was entered incorrectly.